With a hatchback version of the tenth generation of Honda Civic expected soon, we’ve decided to take a brief look back on its history - specifically, the hatchback.

Yes, the Civic Hatchback - with its practical cargo space, fold down seats, and stylish appearance - is the object of our affection today. While hatchbacks have long been second tier to sedans in the US, you couldn’t drive a lorry down the street in Europe without running into one there. More distinctive than many sedans and with better looks than a wagon, the Civic Hatchback has been a mainstay for those who value extra legroom and head-turning appeal.

Americans got their first taste of the Civic in 1978 when the first-generation was sold as a three-door hatchback and a sedan, which were virtually indistinguishable sans a fold-down seat in the hatchback.

By 1984, the Civic third-generation hatchback wheelbase grew by 5 inches, and a 1.5L 4-cylinder with a 3-valve head became standard across the line. And in 1986, Honda started building its Civics at its American plant in Ohio. The classic Si hatchback was also offered for the first time, and it was immediately popular thanks to its sporty dynamics, low cost, and above average fuel economy.

The fourth generation of the Civic debuted in 1988 along with the Next Generation of Star Trek, and each featured an all-new look. The new starship Enterprise received a facelift in the form of the 1701-D and was sleeker than its predecessor, just like the new Civic. Unfortunately, the new Civic DX hatchback didn't have Warp Speed - but it did pack a new fuel-injected, 1.5L 16-Valve 92 HP engine.

By the time the fifth generation debuted in 1991, the hatchback had not only increased dimensions but also received Honda’s best overall EPA rating of 48/55 MPG. The futuristic look with aerodynamic lines was a huge hit along with the vast interior space. Among the trim levels available for the hatchback were the CX, DX, VX, and Si. By the sixth generation, the trim levels were down to two: the CX and the DX. However, the wheelbase did grow to 103.2 inches, and the 1.6 L engine now had a 106 HP output.

Unfortunately for the Civic citizens of the US, the seventh-generation hatchback was the last model to set tires on American asphalt. In contrast to strong sales in Europe, hatchbacks in general aren’t as popular on this side of the Atlantic where crossovers and SUVs reign supreme. The last model year of the hatchback the US saw? 2005. The same year Tom Cruise jumped on Oprah's couch, Carrie Underwood won Season 4 of American Idol, and Green Day released American Idiot was the last time we saw a new Civic Hatchback.

While the US hasn’t seen a new Civic Hatchback in a more than a decade, Honda seems to think us statesiders are ready for another round. 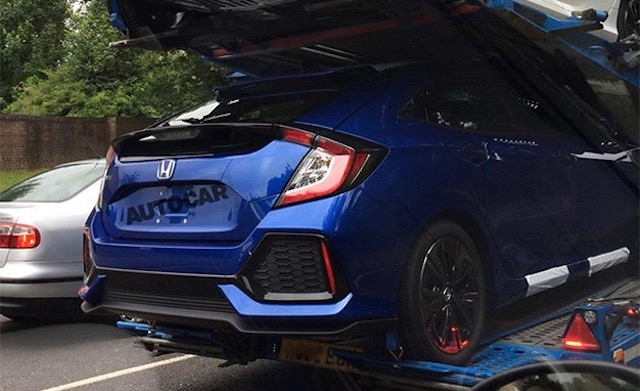 This spy photo of the 2017 Civic Hatchback from Car and Driver has us excited for what's to come!

With rumors swirling, Car and Driver got ahold of some spy photos of the 2017 hatchback in Europe, which is expected to appear in US showrooms sometime in early October. Though info’s a little dicey, here’s what we know so far about the new 2017 Civic Hatchback:

If you can’t tell, we’re excited for the 2017 Civic Hatchback to drop. Are you? Let us know on Facebook!