Shock absorbers have been around since the early 1900's. They’ve functioned in several different forms over the years. One of the earliest shocks used a simple two-arms-and-a-friction-disc setup. The most current shocks use a hydraulic piston. 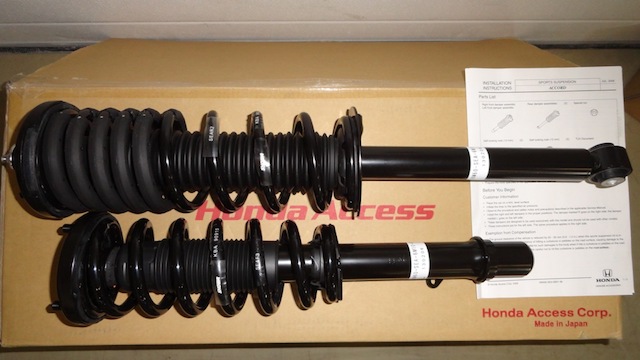 Your tires are like donut shaped rubber balls - they like to bounce. Without shocks, your tires would keep bouncing after you hit a bump. This would be uncomfortable for you and your passengers. More importantly, if your tires are bouncing, the are not in contact with the road, and your vehicle doesn't have traction. Without traction, it's easy to lose control of your vehicle.

A modern shock absorber is a hydraulic piston in a metal tube situated behind each wheel. You have to remove the wheels to take a good look at your shocks, but the good news is that it’s easy to figure out if you’ve got a failing one. We’ll discuss the symptoms later, but first let’s clear up a common misunderstanding.

The Differences Between Shock Absorbers and Struts

While both shocks and struts are used to control and minimize the bouncing of wheels, they aren’t the same thing. Shocks and struts serve the same purpose, but they’re designed differently. Let’s go over the main differences between the two components:

What Happens When the Shock Absorber Fails

The shock absorber is a part that’s often overlooked unless it malfunctions, and when that happens, it’s extremely noticeable. Common signs of a failing shock include:

Worn out shocks can seriously jeopardize your safety. They make it:

Worn out shocks can also cause expensive repairs:

Experts recommend replacing your shocks at about 50,000 miles because that’s when they usually start failing. Still, it’s always a good idea to keep an eye out for any symptoms that may occur so you can address the issue as soon as possible before it causes more expensive problems.

What to Do When Your Shock Absorber Fails

A broken shock should be replaced right away. For the sake of your vehicle's balance, your shocks should be replaced in pairs, even if the other shock is still in good condition. Luckily, OEM shock absorbers are pretty affordable when you order them from a reputable online seller like Honda Parts Online.

Do a search on your year and model here to see how much an OEM replacement shock absorber will cost you. Please contact us if you have any questions about replacing your shocks. Our team of experts will be happy to assist you!